This post is not intended to explain everything that can be said about this classic sixties’ movie, because ‘The Sound of Music’ is one of the best Broadway musicals, a landmark film directed by Robert Wise, one of the best soundtracks of the twentieth century, a story of a family of singers, a love story, a story of resistance against Nazism, one history partially shot on the city birthplace of Mozart … and of course, the story that you personally want to understand. Finally in my opinion I think it should also be highlighted the story of a nun (‘former nun to nanny’) with vocation of dressmaker.
Someone who can design a ‘pinafore dress style’ for the seven boys and girls from the tissue of some old curtains,  is a true fashioner.
The character of Mary, conveys a taste for the world of clothing when in the song composed by Richard Rodgers with lyrics by Oscar Hammerstein and sung by Julie Andrews, ‘My favorite things’ she sings “warm woolen mittens” or “girls in white dresses with blue satin sashes”.
Here pleasure is to contemplate the magnificent drawings that this designer Dorothy Jeakins, prepared for the main character and for which he won an Oscar.
Excuse the poor english of this blogger. Kindly, Henry.

By Lubalin, Herbert F. – The typography for title

Some sketches from the first storyboard 1

Some sketches from the first storyboard 3

Some sketches from the first storyboard 2

A still from the film. Maria with seven children and their new costumes, ride their bikes

By Richard, the composer – The title of the main song handwritten

A still from the film. A cute scene of love among male and female goats 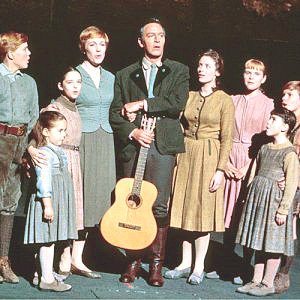 A still from the film. Maria, the captain and the seven singers 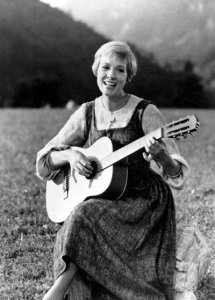 A still from the film. Maria playing guitar 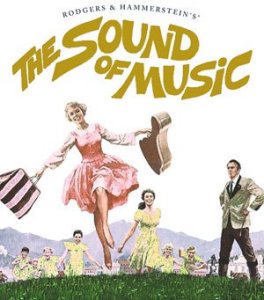 One of the many covers of the film